Fashion From the Past: All About 1930s Style

Often overshadowed by one of the darkest times in history, 1930s fashion was the polar opposite of the great depression. The 1930s clothing trends were full of glamor inspired by what some may consider the height of Hollywood. With fashion statements of decades past making a comeback in modern fashion, you can create your own glamorous look for daily life and special events.

Fashion in the 1930s drew inspiration heavily from old Hollywood glamor. From stunning gowns to gangster-style suits, it was all the rage to express yourself in the most glamorous way possible, even during the great depression.

Though glamor was in, tough times prompted clothing manufacturers to use cheaper materials for suits, while other staples such as sweaters and trousers became more common-place, especially in men’s fashion.

Some of the celebrities that helped to inspire whole generations of trends are still household names today. 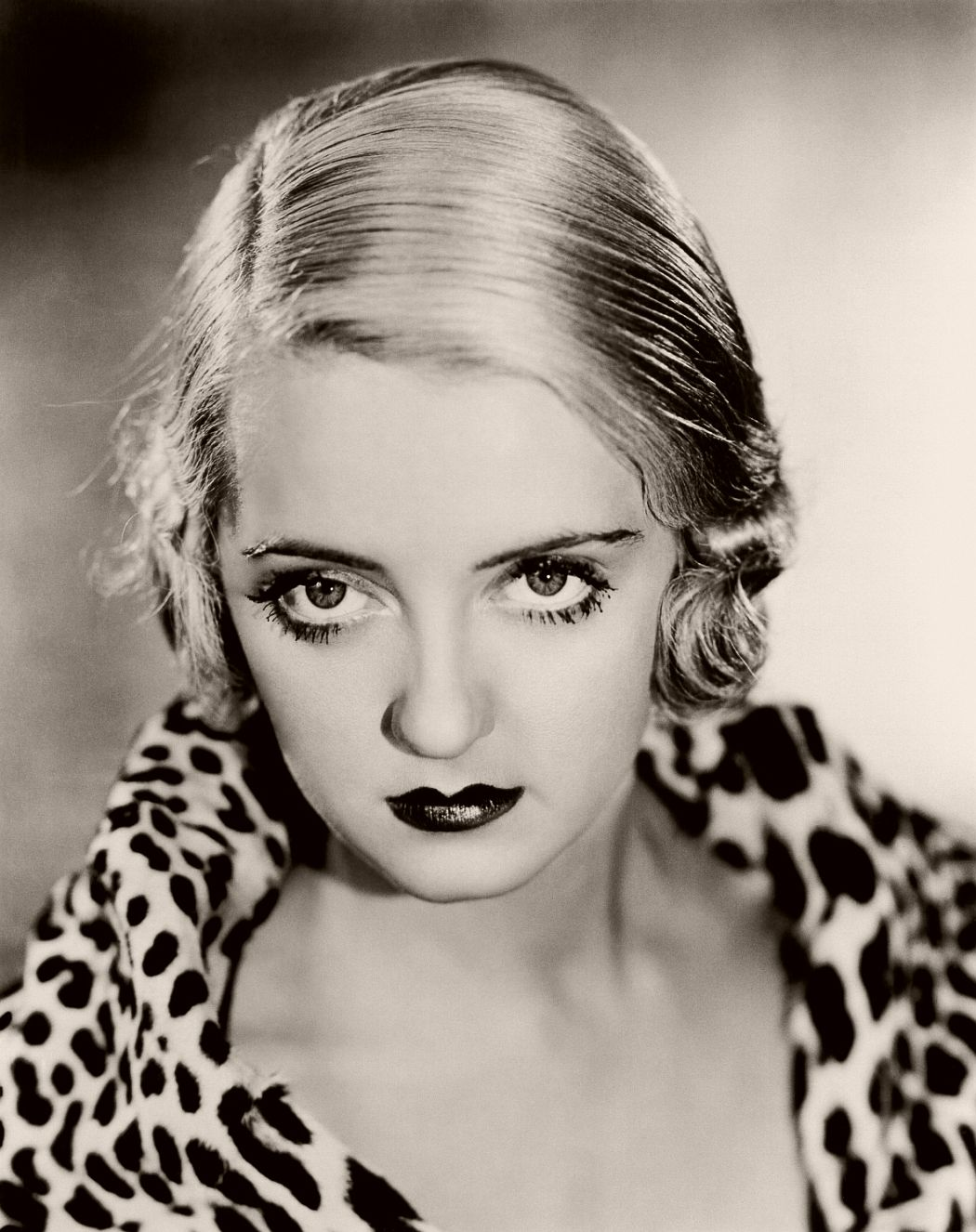 Bette Davis is arguably one of the most iconic feminists in history. She was a hellcat who told Hollywood that realism was more important than being pretty. Her short blonde bob and fashionable outfits were often emulated by girls who would consider her a hero. 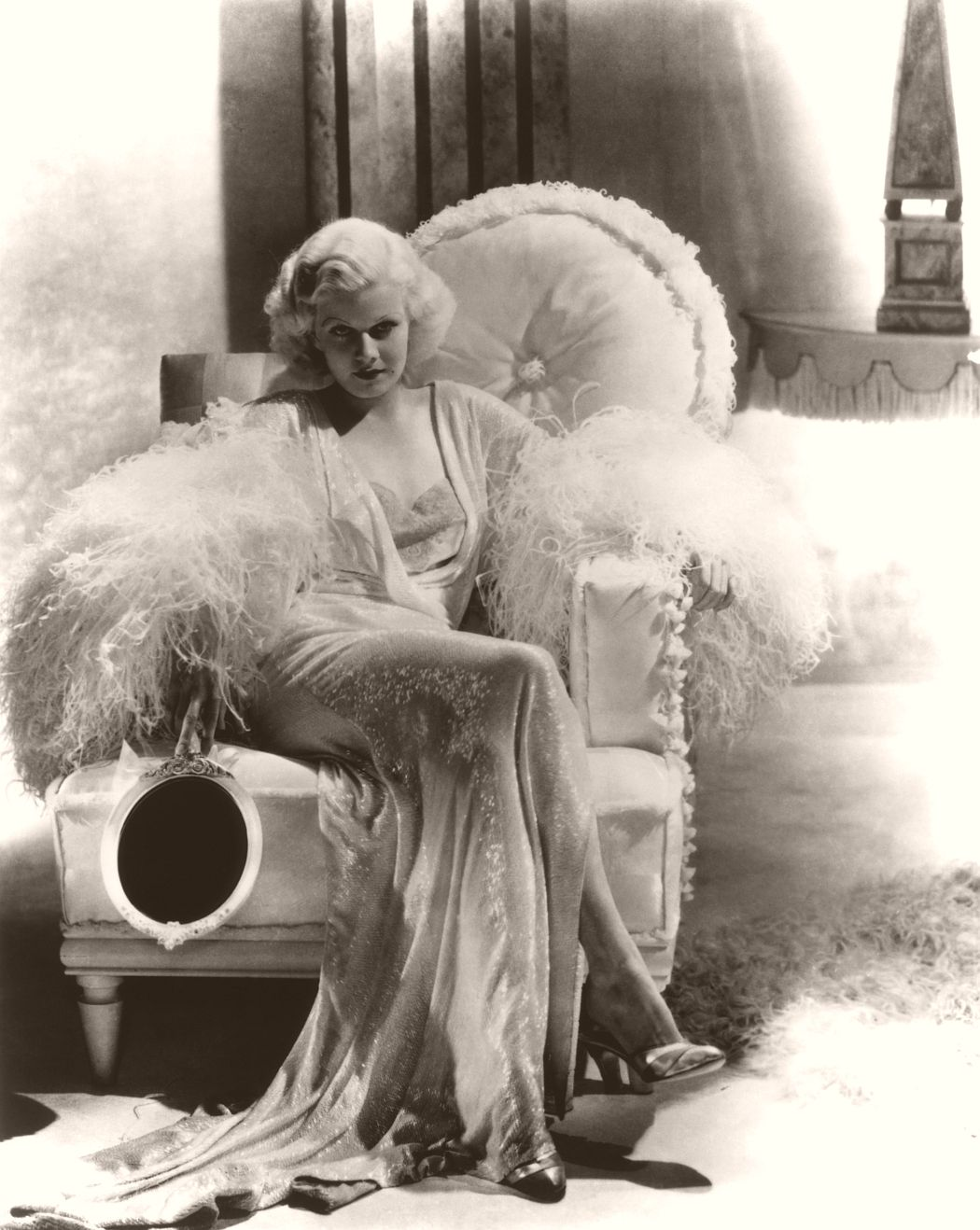 Jean Harlow, another Hollywood icon who sported the ever-popular platinum blonde bob that seemed to only inspire many copycats. Even Marilyn Monroe said that Jean was her idol, which shows just how far her reach was.

Joan Crawford, one of the highest-paid women in Hollywood in her time, was a very well dressed woman both on and off the screen. She was partnered with the legendary costume designer Gilbert Adrian, who helped to make her one of the best-dressed women in the 1930s.

Manufacturers of clothing even replicated a ruffled dress designed by Adrian for Joan’s character Letty Lynton. These replicas were even sold in Macy’s department stores, with Americans snatching up over 15,000 of these copies. 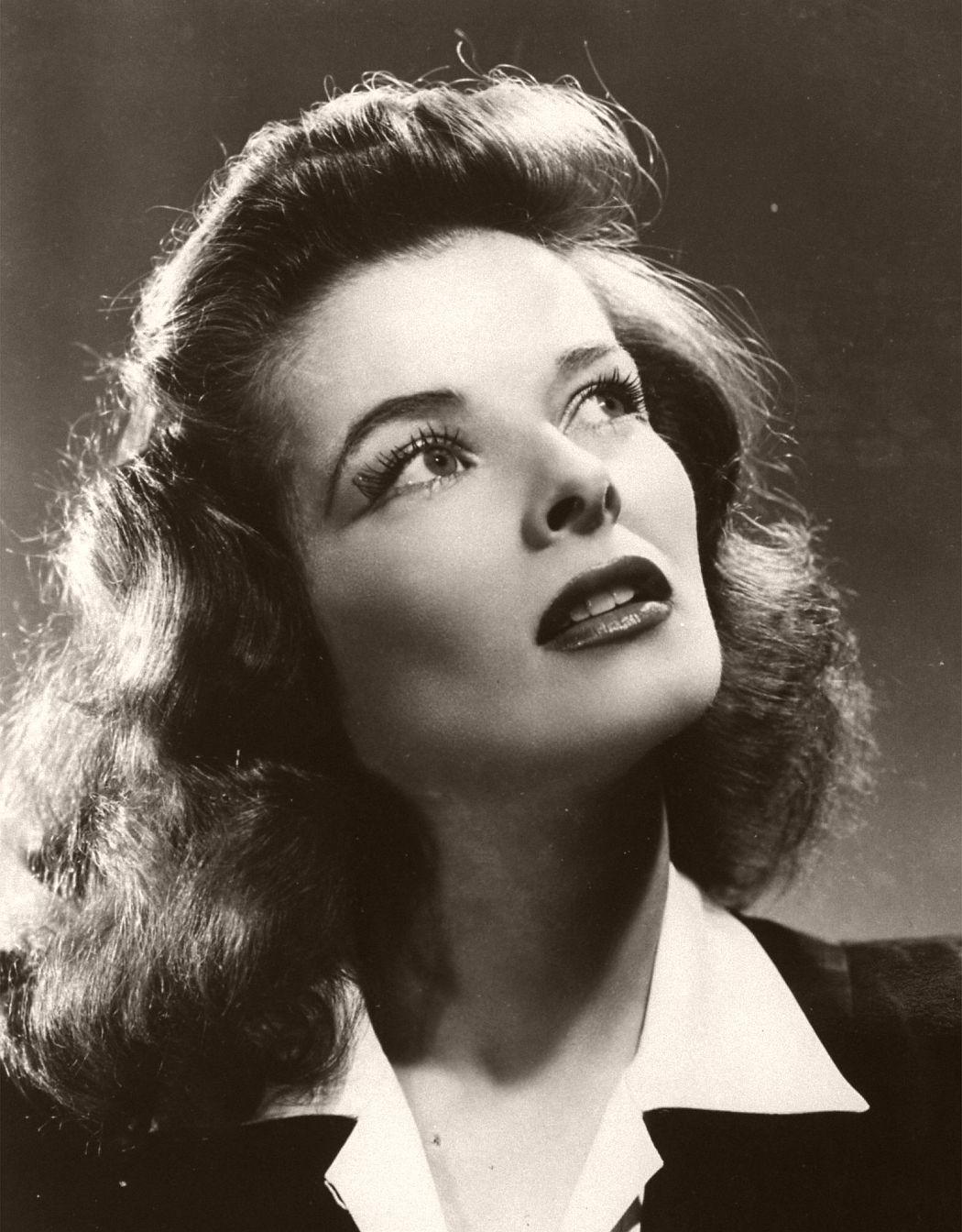 Katherine Hepburn, an icon that still has a lasting influence on fashion today was a champion of women wearing menswear. If you love wearing trousers or wide-leg pants and shorts, you can thank Katherine for her keen fashion sense.

In 1986 she was awarded with a lifetime achievement award by the Council of Fashion Designers of America due to her influence. 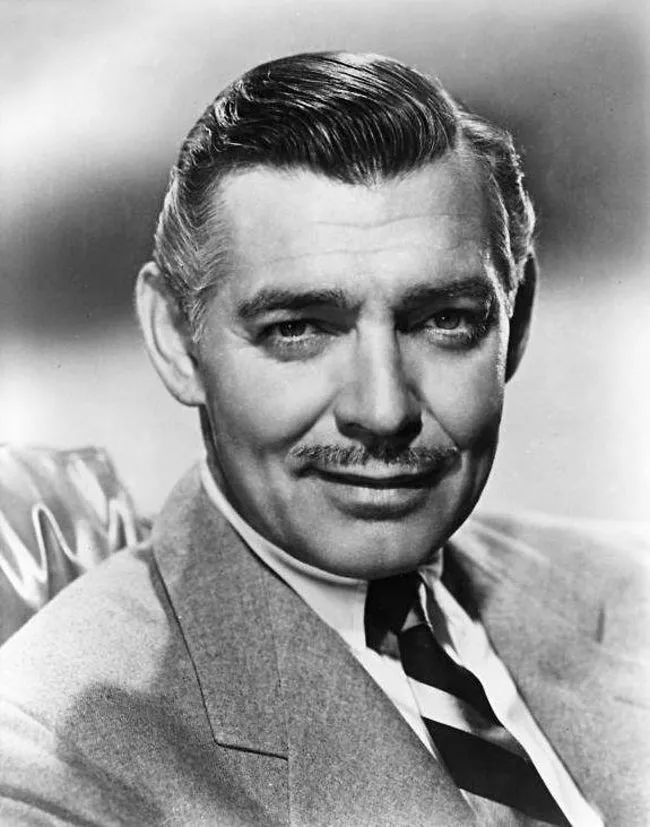 Clark Gable was an Oscar award-winning star of the famous Gone With the Wind, Happened One Night, and Mutiny on Bounty. While men’s fashion didn’t seem to sway too far from the norms in the 1930s due to the great depression, the smart look of most 1930s actors inspired the fashion industry to manufacture more affordable suits.

Must Haves to Style your 1930s Look 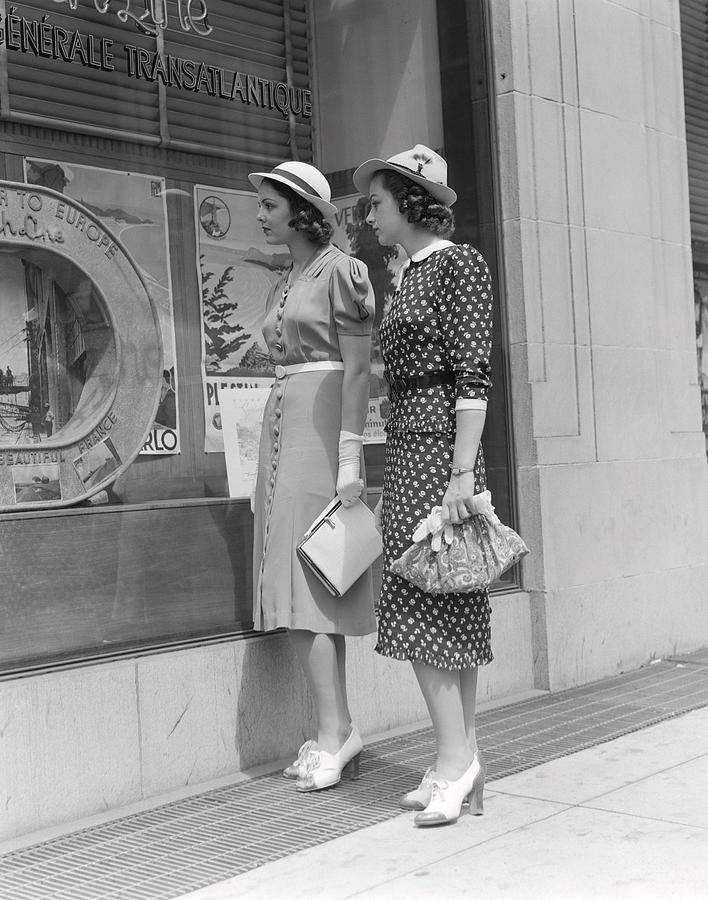 Often times made at home or purchased from manufacturers who mass-produced low-cost clothing, dresses from the 1930s were a staple for women. Many dresses started to include things like zippers and were made of durable cotton which was more affordable. However, that didn’t mean that they weren’t fashionable.

These dresses were often found in stunning floral prints and were accessorized with puff sleeves, belted waists, collars, and some even featured pockets.

Called a midi dress in modern times, you can style these cute dresses with a thin belt at the waist and a pair of stiletto heels. 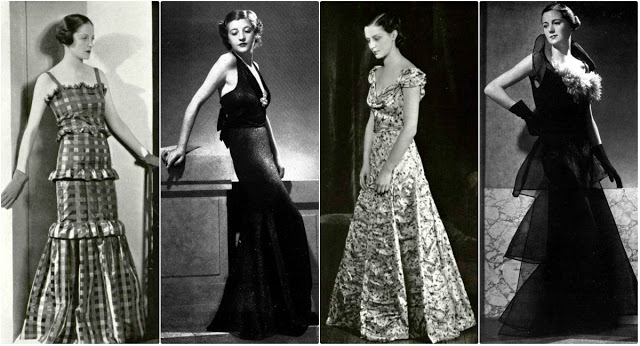 Old Hollywood evening gowns were all the rage. As Hollywood became an escape for the great depression, evening dresses became a popular staple for events. Evening dresses, or gowns, were usually fitted at the waist, sleek and hugging at the waist while slowly expanding from the knee toward the floor.

Some evening gowns were adorned by ruffles, puff sleeves, high necks, or halter style necklines. One of the signatures of 1930s Hollywood inspired gowns were the backless evening gowns, giving a sultry peek at the back of the woman bold enough to wear it.

If you have a special event coming up, a 1930s evening gown can be paired with some heels, neutral gloves, and understated but elegant earrings. 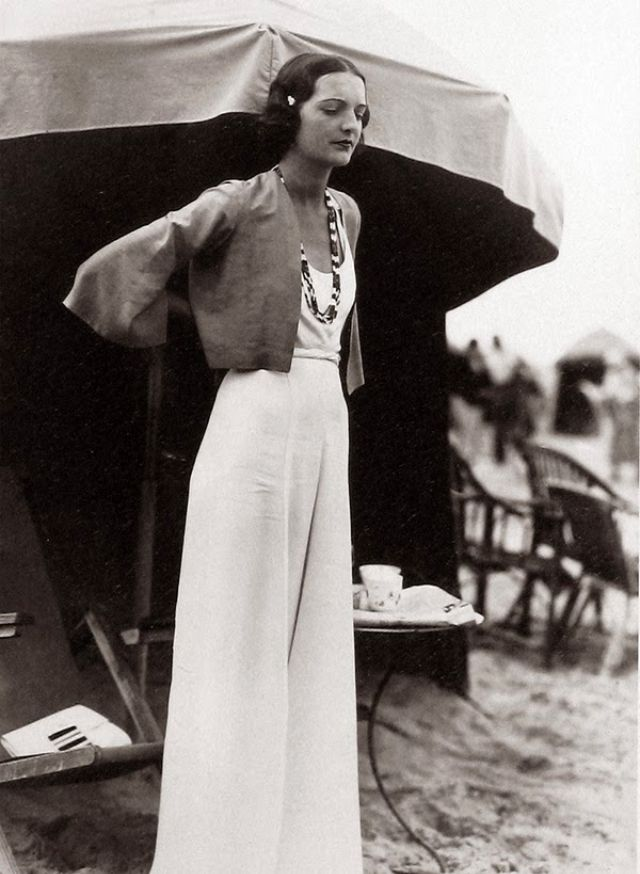 The 1930s were a turning point for women. This is when it became more socially acceptable for women to wear pants in certain social situations such as hiking, picnics, skiing, or watching sporting events.

Many of these pants were made from affordable cotton and allowed for ease of movement despite their high-waist silhouette.

Today, you could easily pair wide-leg pants with a casual top and flats that suit every-day activities. 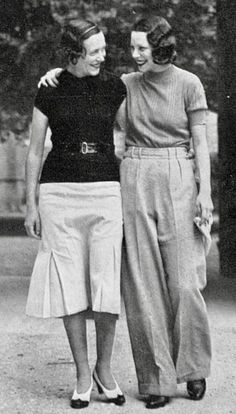 Whether they were paired with pants or skirts, there was an array of sweaters and blouses that came in many different colors and patterns, including floral prints which were extremely popular.

One tried and true 1930s fashion statement is pairing a button-up blouse and a pair of wide-legged trousers which gives a playful aesthetic. 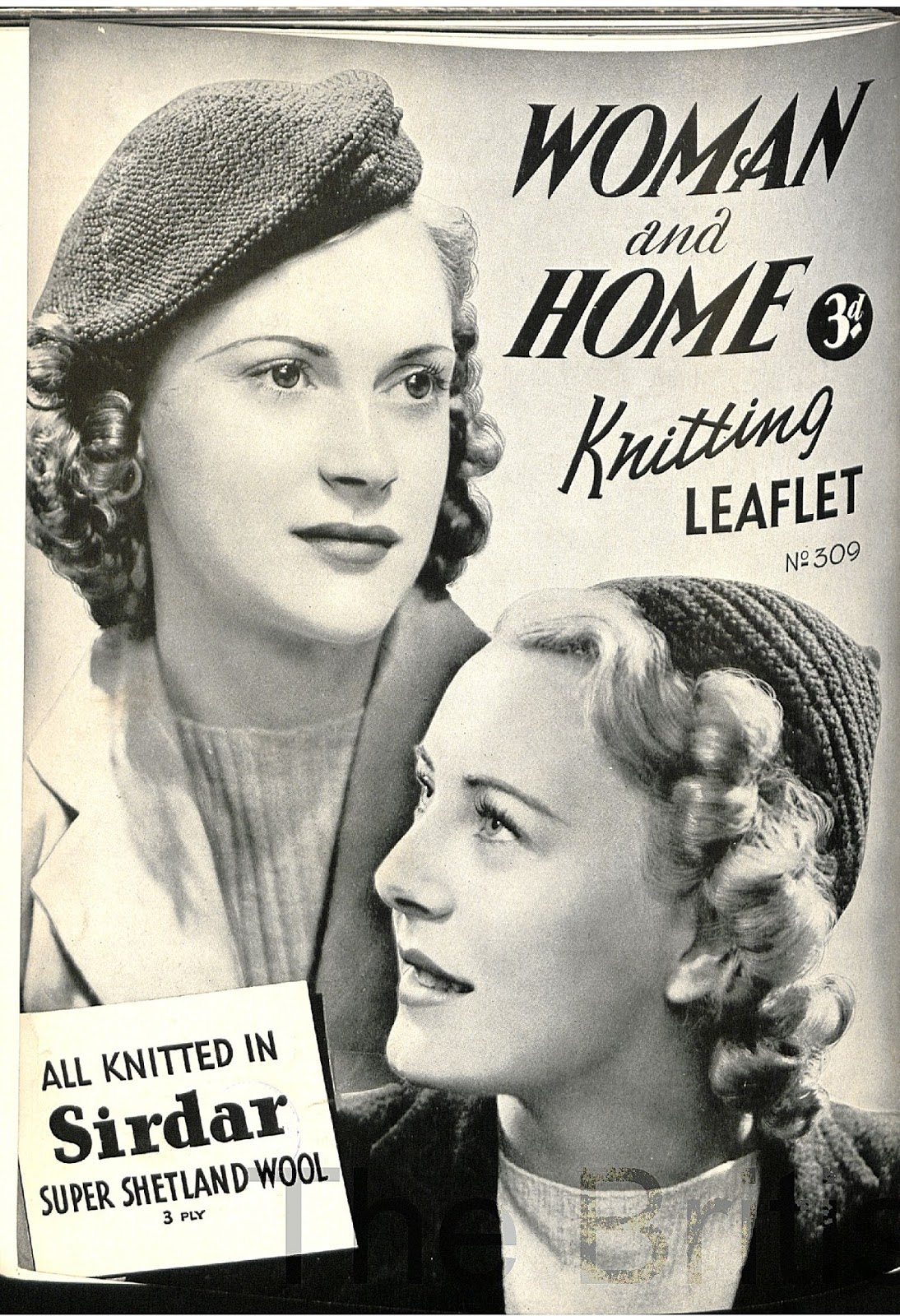 Slouchy hats, tilt hats, and knit berets were a great fashion accessory in the 1930s that took their look to the next level. 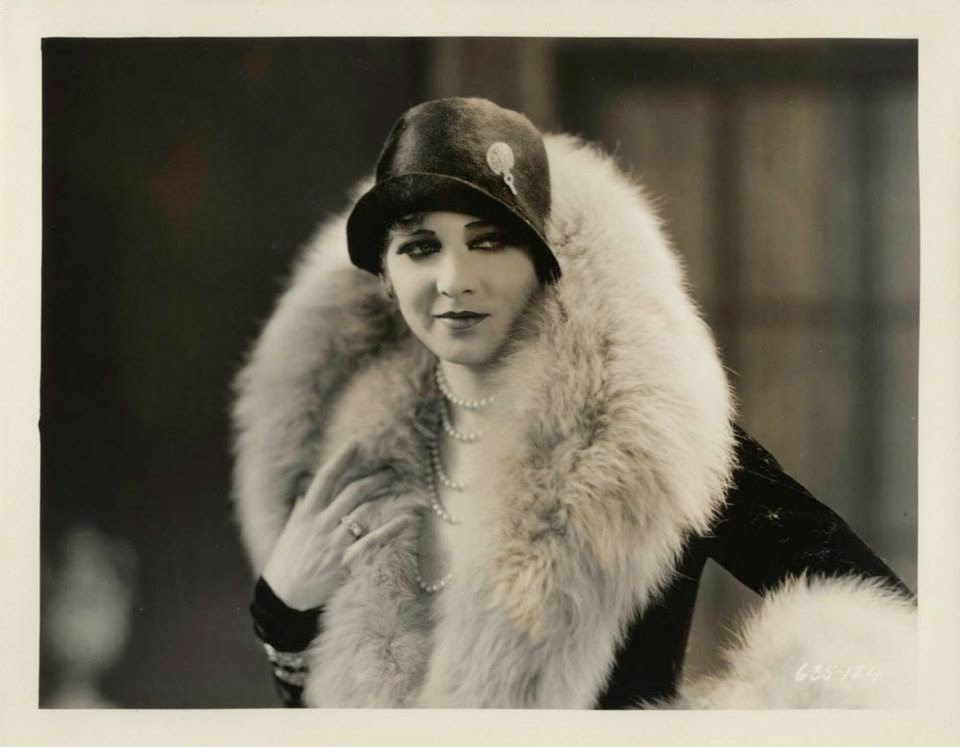 Easily emulated in today’s fashion with a more cruelty-free option, faux fur, fur collar winter coats were a huge hit with women in the 1930s. 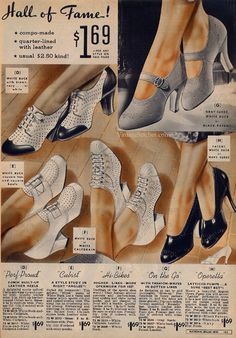 1930s women’s footwear options were often sleek, simple and affordable. You can pair your oxford shoes with a cute floral-print house dress or a pair of comfortable high-waist trousers and a blouse. 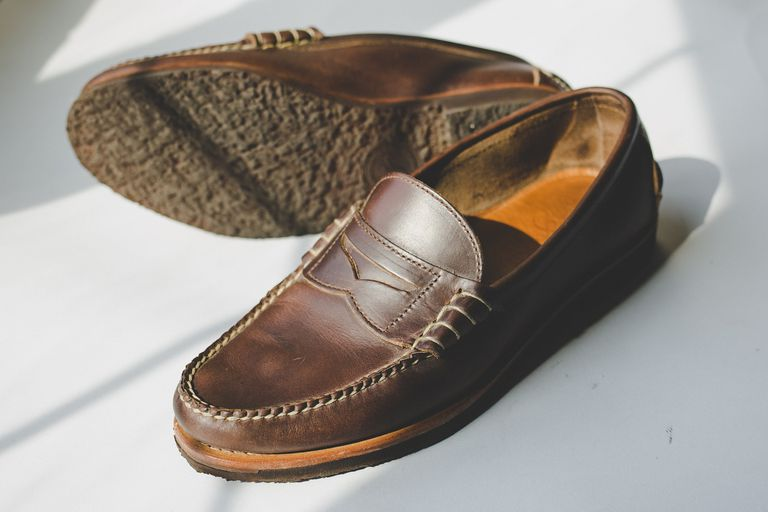 Loafers have been a fashion staple for decades, but, they were extremely popular among men in the 1930s for their comfortable yet fashionable look. They could be paired with suits or casual outfits. 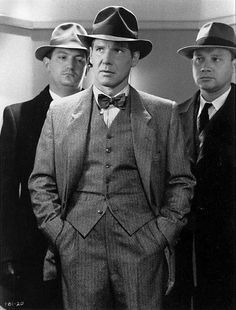 Often confused with the Fedora, Trilbies were a popular hat style in the 1930s. These hats became popular due to the portrayal of gangsters in Hollywood films.

Trilbies are comfortable yet fashionable enough to be paired with a tweed or fashion suit. 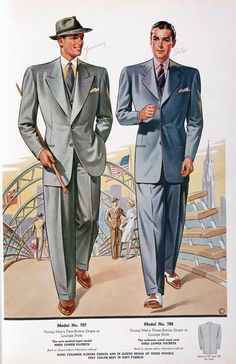 While the economy was struggling, men still had to ensure that they looked their best while making ends meet. Enter the drape suit which was usually made of much more affordable materials.

Along with drape suits, white dinner jackets and tweed suits also became a huge hit with men due to Hollywood influence.

You can pair a sleek drape style suit with a fedora and two-toned brogues for the perfect 1930s look.

Two-toned brogues were the perfect choice of footwear for men. They could often play double-duty between workwear and formal events. They can easily be paired with casual looks like shorts and a T-shirt or a full two-piece tweed suit.

If you love 1930s fashion, you are probably just as inspired to create your own throwback look. With the resurfacing of vintage clothing, it is easier than ever to get this glamorous look in your own wardrobe.

Which look is your favorite?

Retro Fashion For Men: What Clothing Did Men Wear In the 1930s?

Fashion From the 50s: Retro Styles You Can Wear Today

What Were the Most Popular Hairstyles Of the 1940s? 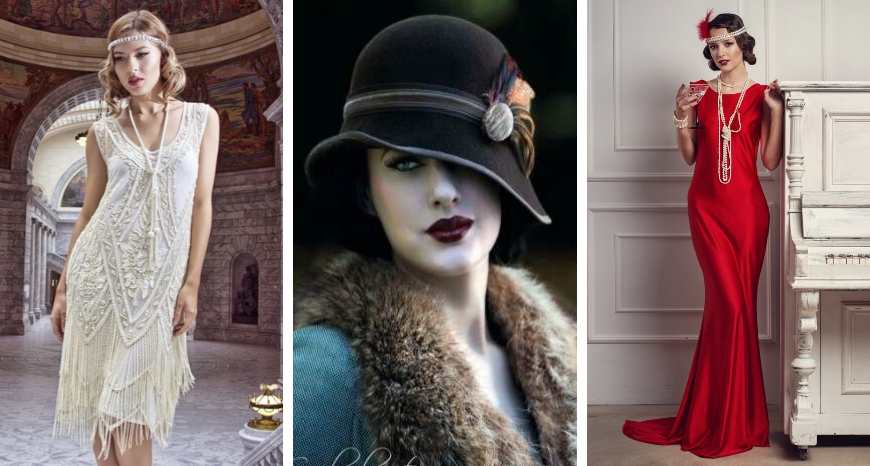 1950s Fashion Style And How to Recreate A Vintage 50s Look